Ahead of my review of book six in the PC Grant series The Hanging Tree, I wanted to write a blog post about why I love this urban fantasy series so much.

There are currently 7 books in the series:

The question is why do I love this series of books so much? Its simple, I love fantasy and I’m partial to a good police drama!  So the PC Grant series of books which is a crossover of the two genres is perfect reading material for me!  Think adult Harry Potter meets Cormoran Strike and you will pretty much know what to expect!

Grant is a Police Officer, but a pretty unique one, as he is an apprentice wizard. He has moved from the mainstream force and into the Met’s Economic and Specialist Crime Unit 9, also known as ‘The Folly’.  His adventures are mainly set in London and he encounters, ghosts, unicorns, temperamental river gods, while solving crimes with a magical element to them.

Admittedly I have grown up reading and loving fantasy, so these books were always going to appeal to me. But saying that, I’d never recommend them if they weren’t well written, with the best elements of both genres. I love all the supporting characters, importantly; as it’s rare an individual creation can carry a story.  Aaronovitch gives us a wealth out of the ordinary, peculiar and fantastical characters such as Mama Thames, The River Goddess of Britain’s greatest waterway and Molly the Folly’s live in domestic help.  Far from human, little is known of where she comes from, yet she looks after Grant and his boss Detective Chief Inspector Thomas Nightingale like a protective mother hen.  There are plenty of human characters, such as Grant and his sidekick Lesley, so don’t be put off by the magical elements in the books.

All the books in the series are a pure delight, written with a lightness of touch often missing from gritty detective thrillers and the story is less convoluted than many fantasy books. They are simply urban fantasy at its best.  The comedy element adds to the enjoyment of Aaronovitch’s tales of murder, bad behaviour and paranormal activity, giving us as the reader an alternative view of the daily activities of the London underworld and the police, who have to keep a lid on the criminal activity threatening to implode London’s outwardly calm exterior.

I maybe the only one, but I love the idea that just below the streets of London, another fantastical world exists and within that a naughty/mischievous/evil (take pick its all there in these books) element exists. But it’s all okay because The Folly and Peter Grant are there working to protect us. 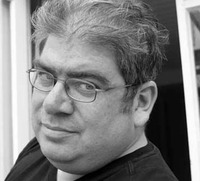 Ben Aaronovitch’s career started with a bang writing for Doctor Who, subsided in the middle and then, as is traditional, a third act resurgence with the bestselling Rivers of London series.

Born and raised in London he says that he’ll leave his home when they prise his city out of his cold dead fingers.