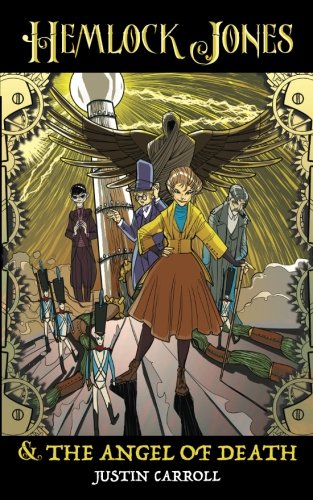 Ten doors down from the home of a world famous ‘consulting detective’ lives twelve-year-old Hemlock Jones, and her recently arrived housemate and unwitting companion, Edward Whitlow. Hired to ‘demystify’ the mystery of a man’s murder by a terrifying angelic spectre, Hemlock and Edward’s investigations will lead them all over Victorian London, uncovering bizarre and deadly foes, figures from Hemlock’s hidden past, and a plot to take over the city… Hemlock Jones & The Angel of Death is the first of the Hemlock Jones Chronicles, a series of detective adventures for children and adults, set in Victorian London.

Firstly many thanks to the author Justin Carroll and blog tour organiser Anne Cater for the ARC of Hemlock Jones & The Angel of Death in return for an honest review.
There is so much to love about this YA thriller/fantasy mix, it is fun to read, has great characters and best of all, is likely to be only the start of a series of books based around Hemlock Jones and her sidekick Edward Whitlow.
When reading as a child, I wanted to lose myself in a dam good adventure and that is exactly what this book is. The greatest complement I can pay it is that it reminded me of long days curled up with a paperback as a child. I was completely absorbed in the story and characters, cut off from the world around me and it was fabulous.
In a time when social media has such a hold on the time of younger readers, a book needs something special to get them reading. Hemlock Jones has two fabulous characters and a cover that reminds me of the steam punk books written for adults and closely related to the graphic novels that have such a wide following. This is what I think gives it that little hook that will attract many readers, it is neither pure thriller, but also adventure and with elements of fantasy.
The characters are wonderful , especially Hemlock Jones who is an intelligent and feisty heroine . It’s great to have a strong young female lead who with her flamboyant and eccentric dress sense, says to young readers, especially girls, it’s okay to be different, that you don’t have to conform to traditional norms of behaviour. Then we have Edward who is more your traditional young boy, determined to pursue his education and make his parents proud. The typical roles of a lead character being male and the sidekick female are reversed here and as far as I am concerned earns it massive brownie points. I want my niece and god children to read novels that don’t pidgeon hole them into excepted gender roles, and Hemlock Jones and The Angel of Death gives them the chance to imagine themselves as the leader.
It is a fabulous read. Full of adventure and danger. Perfect reading for young readers. 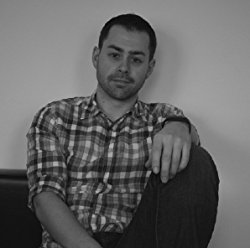 Ever since he stopped wanting to be a dinosaur, Justin Carroll wanted to be a writer. He graduated with a degree in English Literature and Language from King’s College, London in 2004 and now, in between writing and moonlighting in marketing for a multinational financial services company, he fritters away his time on all manner of geeky things. Shortlisted for several international short story competitions, Justin was a finalist in the 2010 British Fantasy Awards. 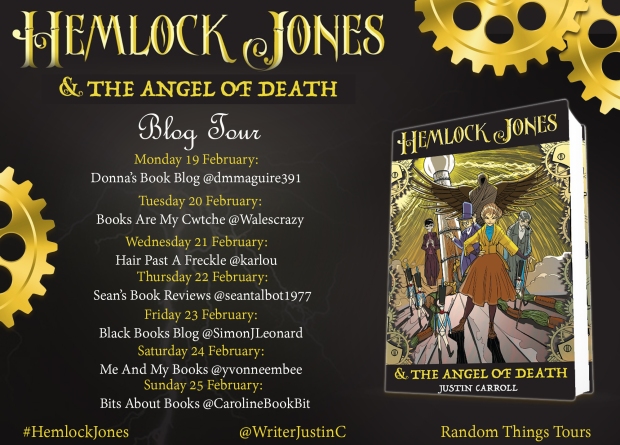 2 thoughts on “Blog Tour ~ Review ~ Hemlock Jones And The Angel Of Death by Justin Carroll.”