Archangel Lucifer lives a comfortable life of self-imposed exile with his vampire lover, Kai. When the other Archangels come to him with a problem — Heaven is gone and their Father is missing — he refuses to get involved because not only is it not his problem, but it’s probably some elaborate ruse they’ve cooked up to lure him back into the fold. When he’s personally attacked, he finds that he’s wrong on both counts. There are other powerful gods at work, gods who believe the current creation is flawed and must be destroyed.
Kai is thrown off balance when Lucifer disappears, and his life begins to spiral out of control. In the past, he never cared that he was looked down upon and called Lucifer’s pet. But with Lucifer absent, he’s left to navigate a world that doesn’t respect him. Since the only true currency is respect, he must gain it the only way his enemies will understand, through blood.

I would like to thank the author Susan-Alia Terry to my blog today with an extract from her book Coming Darkness. Many thanks also to blog tour organiser Rachel Gilby for the invite to take part in the tour.

When Michael appeared at the gate, Lucifer was secretly glad he had placed wards preventing him or any other unwanted family from coming any further. Otherwise Michael would have been on the porch spoiling his recently repaired mood. He should have known that his annoyingly pedantic brother would not let this go. If it involved what Michael perceived as his duty—and everyone else’s—he would be relentless, refusing to give an inch until he’d had his way. Of course he wouldn’t accept his non-involvement, why should this time be any different?
“You know, I’ve always loved the sea. It has the unique ability to cleanse the soul of unpleasantness,” Lucifer said, knowing Michael could hear him easily, despite the kitty-corner positioning.
“You are not on the sea,” Michael replied.
“And you, brother mine, are tedious and predictable.“
There was no immediate reply, although Lucifer knew he was still there.
“I didn’t realize you hated us this much.” It surprised Lucifer to hear a touch of sorrow in Michael’s voice.
Lucifer sighed, tamping down the sudden wave of guilt. “I find it hard to believe that you actually care,” he replied honestly, no longer wanting to hold on to pretense.
Again, Michael took a moment to reply. “At the time, it seemed like the right thing to do.”
Still stroking the cat in his arms, Lucifer stood and walked with her to the arched porch entrance, down the stone steps, and then along the winding path to the entrance gate. Once there, he made no move to invite Michael in but gazed at him over the waist-high gate.
“Making me the enemy seemed the right thing to do.” He looked down at the cat and gave her a particularly thorough scratch under her chin. Blissed out, her purrs rose in volume, and she raised her head giving him more access. “How does that work, exactly?”
“Things just… got out of hand,” Michael replied with a helpless gesture. Still scratching, Lucifer said nothing but instead tilted his head to the side examining the obviously uncomfortable archangel. “It was an idea. One of many, actually. It just… seemed to catch hold. Before we knew it, it was out of our control. For what it is worth, I am sorry.”
Lucifer hadn’t expected the honest confession—or the apology for that matter. If The Old Man was indeed behind this sudden reversal, he no longer cared. Warmth bloomed in his chest, and tears stung the corners of his eyes. It surprised him that it took so little to ease his soul. He kissed the top of the cat’s head and bent over to put her down. When he stood straight again, his smile was warm and happy.
“It did work out exceptionally well for me though, don’t you think?” He laughed, crossing his arms and leaning on the gate.
“If you say so.” Michael’s perplexed look said he was being humored.
“I do, and you’re jealous.” Lucifer’s smile widened, and he waved away Michael’s impending protests. “How could you not be? I get to do as I please, live as I choose.” His voice lowered conspiratorially. “And it some circles, my power rivals that of The Old Man himself.” He chuckled, shaking his head.
“Must you call him that?” The others were used to it, but Michael always looked scandalized when he used that appellation.
Lucifer toed the ground around the gate. “When I left and changed my name, He stopped being my father,” he said quietly. “I’ll call Him whatever I choose.”
Michael took a breath to say something but luckily heeded the warning glare thrown his way. That was an entirely different argument, and Lucifer refused to engage.
Still leaning on the gate, Lucifer straightened slightly and looked off into the distance. Swept away by the momentum of truth telling he said, “I hated you for a long time. Hated The Old Man even more for letting you get away with it. Then one day it occurred to me that I had everything I ever wanted. I didn’t have to debase or compromise myself in any way to have fear and respect.” He looked at Michael. “I realized that my dear brothers had given the humans to me on a platter—and for that, I cannot hate you.” His tone grew wistful, “If anything, I feel sorry for you. You run around doing The Old Man’s bidding, bearing the yoke of responsibility—when you could be free.”
Sensing a rebuttal, he altered the topic. “True, I have the fan club of idiots to deal with.” He gestured toward Canes Inferni compound across the river and shrugged. “But they can be amusing, so I can’t complain.” He pushed off the gate and brushed imaginary dust off his pristine cream suit jacket. He’d felt the stirrings of past affinity, and his voice held regret when he said, “Although I’ve enjoyed this time to clear the air, if you’ve come for more—to try and convince me to help—you’ll leave disappointed.”
“You don’t know everything. Let me explain, please.”
Lucifer studied him. Michael’s stoic mask had slipped. He saw urgency, but also… fear? What did Michael have to be afraid of? Concern, yes, but fear? Lucifer was intrigued and decided he’d listen. “Fine. Explain.”

You can purchase Coming Darkness from Amazon

They say it’s never too late to find and pursue your passion. Turns out they’re right. Although Susan loved to read, she didn’t start writing until she was in her late 40’s. A stint in grad school helped her hone her craft, and now she happily spends her days making up stories and figuring out how best to emotionally (and sometimes physically) torture her characters. 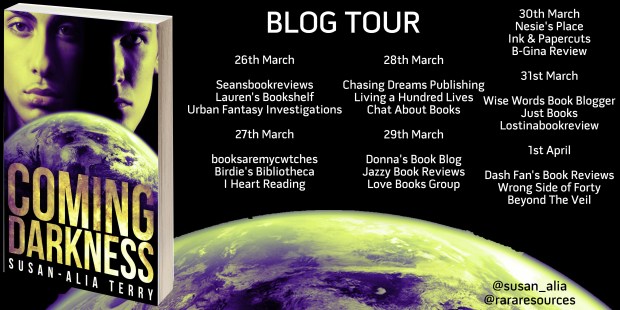