Priscilla Ames is the daughter of a Wall Street hedge fund manager that has made millions in the stock market. She’s reckless, impulsive, always wanting to be the center of attention, but one thing has been constant – her friendship with Avery Moss. They are like sisters that share adventures and look out for each other in times of need.

Avery Moss comes from a working-class family in Brooklyn. She met Priscilla as an 8 year-old at an elite NYC private school where Avery was on a one-year scholarship. They became friends on the first day of school when Avery beat up a boy that was teasing Priscilla. When Avery’s scholarship was discontinued, Priscilla’s father, Peter Ames, stepped in and has supported her schooling ever since, including sending the girls to a prestigious acting college in London

NYPD Detective Kelly Moore is a member of the elite Queens Violent Felony Squad. She is smart and strong and direct. Years ago, her older sister disappeared while traveling in England and the case was never solved, haunting all of her investigations. Moore’s greatest strength and her greatest weakness are two sides of the same coin: when she’s on her game, she works from the inside out, acting on hunches and then backing them up with evidence – but under duress, she acts rashly, leaping before she looks.

When Priscilla’s body is found by Avery in a posh London flat and her death is splashed across headlines worldwide, Kelly Moore flies across the Atlantic to join a crack team of British investigators working on the case.

Together with the London Metropolitan Police, Kelly must track down a twisted serial killer who seems to know her every move and her darkest secrets. As the body count rises, and panic spreads, the killer threatens to make Kelly the next victim.

In a heart-racing game of cat and mouse, Kelly must outwit this elusive master of surveillance – who might be the last person she suspects.

I would like to thank the author Claire Kittridge and blog tour organiser Anne Cater for the ARC in return for an honest review.
I have been reading a lot of thrillers lately and they vary in style and substance in many ways. This Dark Place by Claire Kittridge is a good solid procedural drama and the start of a promising new series around the main character Kelly Moore.
It’s full of dark scenes as a twisted killer stalks the students of a drama college. The story line moves along at an exciting pace. You turn the pages because you need to discover who will survive and how many victims the killer will claim.
Character wise I felt it had much to attract readers. Kelly is believable and given she is the main character this gives the book a good central core. You don’t have to like the main character to enjoy a book, but you either have to be partial to them or really hate them for this type of novel to succeed. Kelly makes the book work because you can’t help liking her and wanting her to win the game of cat and mouse she was engaged in with the killer.
The killer is hateful enough that as a reader, you really want him to be caught. He is dark, warped and manipulative. Perfect villain material. The only wish I had, was that I wanted a few more twists and turns. I had pretty much guessed the killer before they were revealed and I do like it to be a surprise until it happens.
This is a tiny criticism and only based on my reading experience. This is still a very enjoyable read and good solid start to a new series of books. I can see Kelly Moore becoming a firm favourite.

This Dark Place can be purchased from Amazon.

Claire Kittridge grew up in Brooklyn, NY watching The X-files, Law and Order, and a worn-out VHS tape of Sweeney Todd that she found in the basement. Long a lover of atmospheric landscape, rolling hills, and rainy days, Claire fell in love with England and its great fictional detectives while traveling around Britain as a teenager.

An avid reader, triathlete, and boxing fan, Claire lives in New York City with her cat, Chairman Meow. She is currently at work on the second Kelly Moore novel. 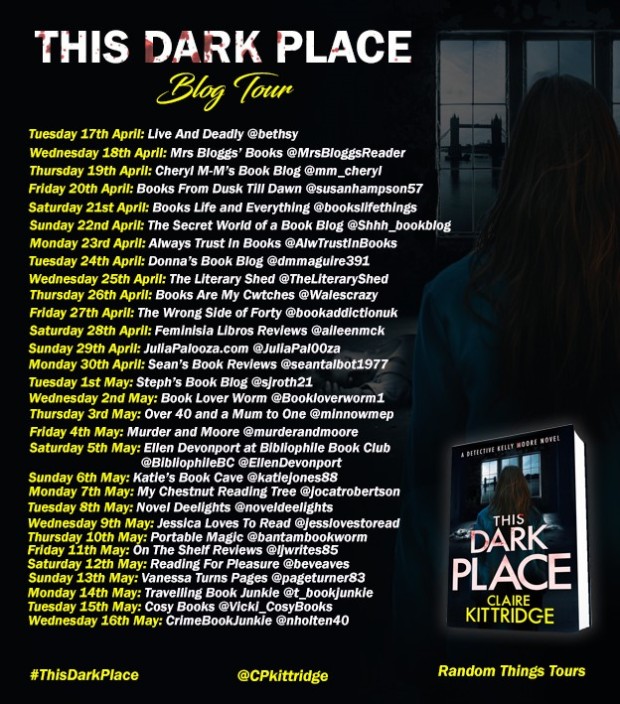