Letterbox is strong, powerful, emotive. A harrowing novel about the 1996 Manchester IRA bombing – what a haunting tale and heartbreaking insight into the lives of those, responsible for the bombings and of those, who by their very being had no choice but to be implicated in it… their lives will never be the same…

At approximately 09.00 hrs on the 15th June 1996, an unassuming white lorry was parked on Corporation Street in the city centre of Manchester, England; It contained over 3000 pounds of high explosive.
At 11.15 hrs the same day, Manchester witnessed the detonation of the largest device on the British mainland since the Second World War … The Irish Republican Army claimed responsibility for the attack.
Based around actual events, LETTERBOX tells the story of Liam Connor, an ordinary boy brought up in Manchester by a seemingly ordinary family. He goes to the local school, loves football and has a best friend called Sean … an ordinary life.
Unbeknown to Liam, his father, Michael Connor, harbours a dark historic secret and follows a life less ordinary … as a furtive yet high ranking soldier within the IRA.
As a result of extraordinary circumstances, Liam’s innocent and carefree world is shattered when he is exposed to the truth about his family’s heritage and then learns about the tragic death of his father at the hands of the SAS.
Consumed with both hate and the need to seek retribution, Liam is taken to Ireland where he is intensively trained to become a highly skilled and efficient soldier within the Irish Republican Army … He is 16 years old.
Some years later, following the drug-induced death of his beloved sister, Liam is given the opportunity to exact his revenge on those he believed should truly be blamed for the tragedies in his life … The British Government.
Thus, on the 15th June 1996, it was Liam’s responsibility to drive the bomb-laden lorry into the unsuspecting city of Manchester and let the voice of the IRA be clearly heard …
And listened to…

I would like to thank the author P A Davies, M J D Publishing and blog tour organiser Caroline Vincent for the ARC in return for an honest review.
Events like the IRA bombing on Manchester on the 15th June 1996 never happen in isolation, they are proceeded by a narrative dating back throughout the history of this country, that explode like shockwaves in the present. Letter Box by P A Davies explores this, by taking one version of what happened and exploring the events leading up to it. It does so with one foot firmly planted in historical fact and the other in the fictional life of young Liam Conner and his role in the bombing of Manchester.
P A Davies has written, what was for me, a highly enjoyable and intricate look into why the IRA decided to plant a bomb in the centre of Manchester. He gives the story a human angle and explores the fascinating and emotive relationship between fragments of Ireland, the powerful and terrifying IRA and the leaders of the British mainland. He gives a voice to the horrifying reasons behind the the 15th June 1996, but does so with sensitivity. Writing a novel about recent events, isn’t easy, given that so many people caught up in the explosion are still alive. P A Davies doesn’t glorify it, he presents a powerful story of a young man whose childhood is shattered by hidden truths and lies, that send him down a path full of hate and a overwhelming urge for revenge.
Characterisation is perfect. We are given a reason for Liam’s role in an act of such horrifying violence and though there is no real justification, he is so beautifully written that you can feel his pain and the echoes of a shared hatred born from oppression and colonialism. The trauma that envelopes him makes him a character whose violence I abhor, whose anger is wrongly targeted at innocents that bear no responsibility for historical wrongs, but the way he is written makes him fascinating at the same time. The supporting characterisation on both sides of a historical divide gives the story depth and humanity to such an emotional subject.
For me the historical element was the best part of the story and the attention paid to the events leading up to a single moment in time.
I would without doubt recommend this book. It deals with a difficult subject with sensitivity.

You can purchase Letterbox from Amazon 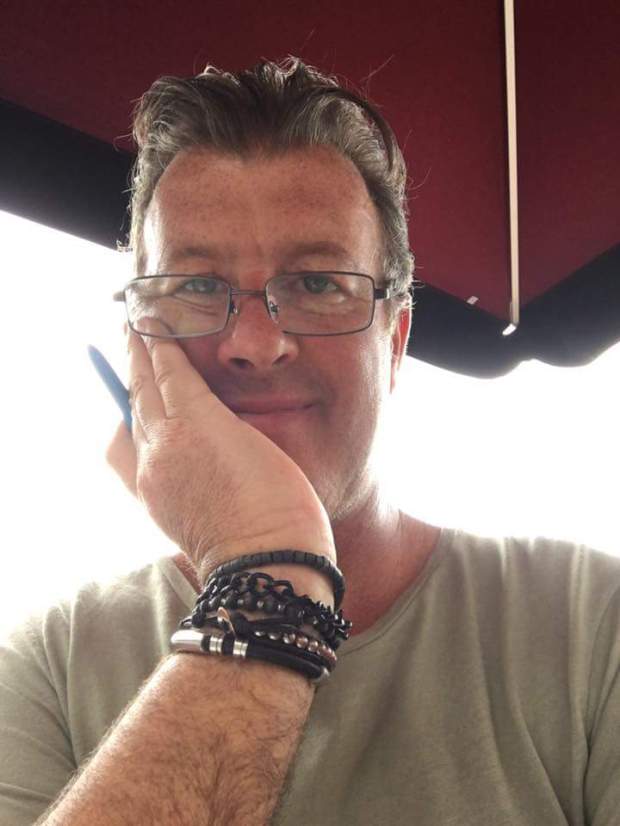 This is P.A. Davies at his favourite writing space: Costa Coffee Café.

P.A. Davies grew up in Manchester, UK, a place he has lived in and around all his life – he loves Manchester and is proud to be part of the multi-cultural, modern city that houses two Premiership football teams and is the birthplace of many a famous band, such as Oasis, the Stone Roses, Take That and Simply Red.
For most of his life, he dabbled with writing various pieces, from poems to short fictional stories just for fun. However, following advice from a good friend he decided to have a go at writing a novel. Thus, his first novel ‘Letterbox’ was conceived, a fictional take on the infamous IRA bombing of Manchester in 1996. It took him over a year to complete but while doing so, he found it to be one of the most satisfying and interesting paths he had ever followed. It comes as no surprise that the writing bug now became firmly embedded within him.
P.A. Davies’ second book was published in May 2013, ‘George: A Gentleman of the Road’, a true story about one of Manchester’s homeless. His third novel, ‘The Good in Mister Philips’, is an erotic novel (arguably set to rival Fifty Shades…!) and his fourth, ‘Nobody Heard Me Cry’ (Dec. 2015) is again a fact-based tale, this time of Manchester’s darker side. The thriller ‘Absolution’ (Oct. 2017) is his fifth novel. Currently, P.A. Davies is writing his sixth novel, titled ‘I, Muslim.’
To label P.A. Davies’ writings would be difficult because his works diverse from thrillers to touching novels to true-to-life tales embedded in a captivating story for the author is an imaginative and versatile storyteller.

2 thoughts on “Review ~ Blog Tour ~ Letterbox by P A Davies.”