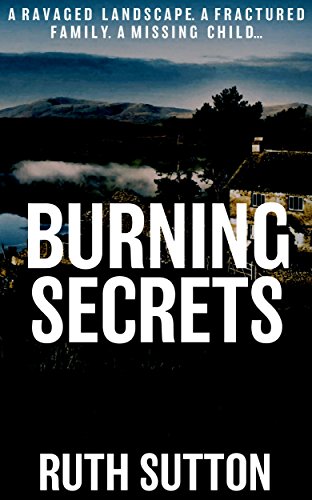 It’s the spring of 2001 and Foot & Mouth disease is raging across Cumbria.

Twelve-year-old Helen Heslop is forced to leave her family farm and move in with relatives in a nearby town because the strict quarantine means she can’t travel back and forth to school in case she inadvertently helps spread the disease.

As the authorities and the local farming communities try desperately to contain the outbreak, tensions run high and everyone’s emotions are close to the surface.

And then Helen disappears.

The police search expands all over the northwest coast where farms are barricaded and farming families have been plunged into chaos – not least the Hislop family, where potentially explosive fault lines are exposed.

Under the strain tensions build inside the police team too, where local DC Maureen Pritchard is caught between old school DI Bell and new broom DS Anna Penrose.

Will Helen survive? And can life for the Heslop family ever be the same, once burning secrets are discovered and old scores settled?

I would like to thank the author, Fahrenheit Press and blog tour organiser Emma Welton for the ARC of Burning Secrets in return for an honest review.

Set during the horrors of Foot and Mouth disease that decimated the livelihoods of families that had been farming for generations, this thriller looks into the secrets that are hidden behind the facade of a loving family; a missing child and a police team at odds with each other, all of which add to the tensions that run through this novel.

Ruth Sutton has written a good story. Within the pages is a sense of dread at the fate of young Helen and with a villain that horrified and fascinated me in equal amounts. I loved that the was conflict hidden not just within Helen’s family , but also within the police team as well, because that fission meant I never knew if that sense of foreboding building up in me as I read, would ever ease. If both the family and those meant to help them were divided, how could there be any chance that Helen would survive? The writer has woven a complex tale that pits the two groups that should be working together against each other and it works really well.

The setting is very much part of the story, because it creates a background for the horror to come. Cumbria, normally beautiful is consumed by fire and disease. What were once open fields and gorgeous countryside was ravaged by the burning pyres of rotting corpses. People were trapped by a land that once provided a living, yet during the Foot and Mouth outbreak, isolation from friends and family bread paranoia and fear of outsiders. This setting gives the story its unique feel, equal parts terror and with a palatable feeling of paranoia and mistrust running through the story. As a reader you can feel this, can see a land and a family at odds to how we see the countryside in our minds eye. It gives the story a bleak edge and affected my feeling towards the story itself. Atmosphere is everything in a thriller and his book has shed loads that kept me reading.

The characterisation is spot on. The family are perfectly written as having a flaw running through them. The whole family fascinated me! The father perfectly portrayed as consumed by fear of the loss of his inheritance, is a heavy drinker and taken over by fits of maudlin self pity on one hand and angry determination on the other. The mother is the Chameleon personality in this story; she blends in with those around her, adapting her personality to those she is with. You’re never sure if she is good or bad, self serving or devoted mother. Then there is the ‘villain’, who is cruel, violent, but deeply troubled. You hate him for his actions, but part of you understands that he needs help as well as punishment. Then we have the police, who are professionally both talented and yet, dysfunctional as a unit. I like DC Maureen Prichard, who holds her own, despite being the outsider in an established team. Her fractious relationship with both DI Bell and DS Anna Penrose, is not displayed as perfect, but more like real working relationships, sometimes a well oiled machine, at others like a kindergarten full of sulking angry children.

If you want a ‘who done it’ where atmosphere comes from a national crisis, where the characters are like spiky , then Ruth Suttons Burning Secrets would be a good choice as your next purchase.

You can purchase Burning Secrets from Amazon

Ruth is a very independent person, which – like many things – is good up to a point, but can get tricky sometimes. She lives in a very beautiful place, but it’s a long way to a cinema, or a big supermarket, and if the time comes when she can’t or doesn’t want to drive, she’ll have to move as there’s no public transport. She qualifies for a bus pass, but there aren’t any buses. Her daughter and her family live quite close by, and she loves to see her two grandchildren. After decades on her own, she has a partner whom she loves. They each have their own house, 40 minutes apart, and this life style suits them both. Ruth wrote her first novel after she was 60.

In addition, Ruth has self-published a trilogy entitled Between the Mountains and the Sea; A Good Liar tells the story of Jessie who risks career and independence with a love affair, whilst her secret past draws ever closer. Forgiven is set among the coal mines and fells of the Cumberland coast. Jessie’s struggle for happiness continues. Fallout features the nuclear disaster at Windscale, which brings a compelling stranger into Jessie’s world.