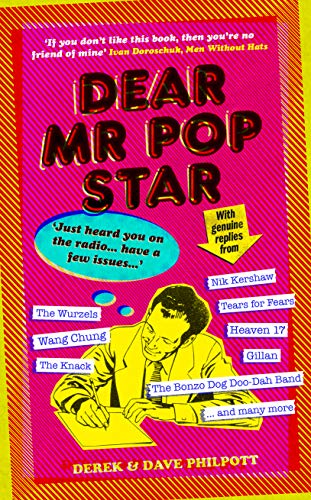 A collection of hilarious letters to iconic pop and rock stars with fantastic in-on-the-joke replies from the artists themselves: Eurythmics, Heaven 17, Deep Purple, Devo, Dr. Hook and many, many more…

For more than a decade, Derek Philpott and his son, Dave, have been writing deliberately deranged letters to pop stars from the 1960s to the 90s to take issue with the lyrics of some of their best-known songs. They miss the point as often as they hit it.

But then, to their great surprise, the pop stars started writing back…

I would like to thank the  author’s and the publisher’s for the ARC in return for an honest review.

Now I must admit, music is not a passion of mine and I was worried I wouldn’t appreciate this quirky book. It’s a credit to the writer’s that I really enjoyed it. It was funny, original and very entertaining.

Taking a clever play on the songs of some incredible lyrics, the author’s penned witty and clever letters to bands and received some equally funny replies. Even though I hadn’t heard of many of the band’s, I still really enjoyed the clever use of the lyrics and wit of the letter writers.  I loved the way I made me smile and reminded me of the charming power of letter writing. It was at its best when band members replied and both are included.

The passion and love of the writer’s for the pop songs the are honouring shines through on the pages. Both authors are incredible letter writers in their own rights and this is what makes the book such enjoyable read.

If you love pop music, you will love this book!

You can purchase Dear Mr Pop Star from Amazon

Derek and Dave Philpott are the noms de plume of two ordinary members of the public, working with help from a worldwide social networking community. 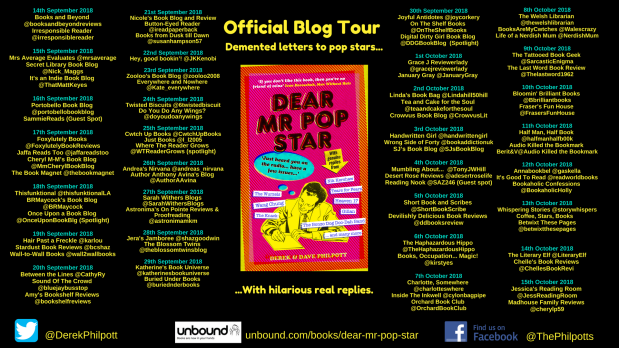