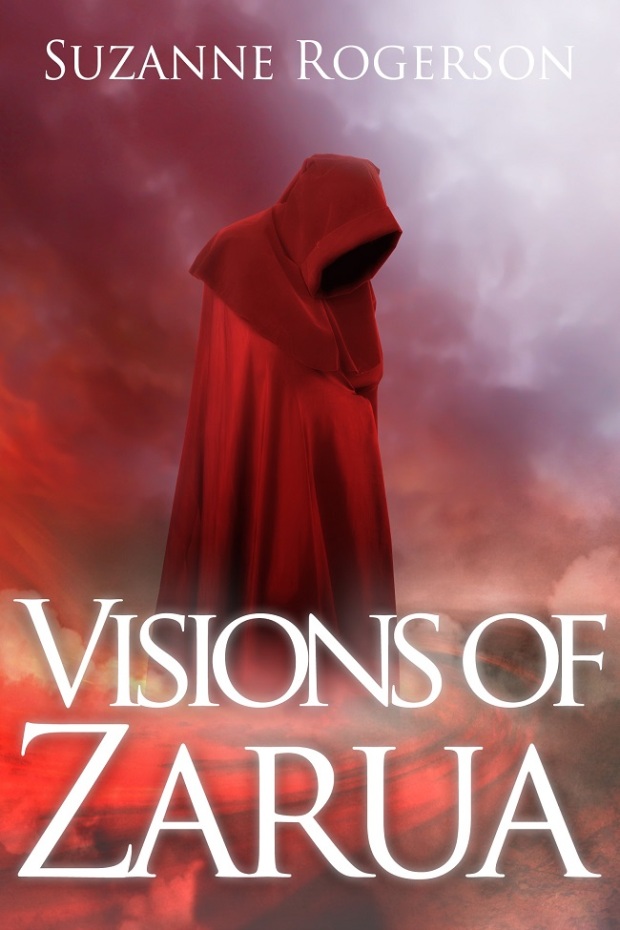 Apprentice wizard Paddren is plagued by visions of a city on the brink of annihilation. When his master dies in mysterious circumstances, the Royal Order of Wizards refuses to investigate. Helped by his childhood friend, the skilled tracker Varnia, and her lover Leyoch, Paddren vows to find the killer. The investigation leads Paddren down a sinister path of assassins, secret sects and creatures conjured by blood magic. But he is guided by a connection with a wizard from centuries ago – a wizard whose history holds the key to the horror at the heart of the abandoned city of Zarua. Can Paddren decipher his visions in time to save the Paltrian people from the dark menace of Zarua’s past..

In a beautiful guest post writer Suzanne Rogerson talks about the wonderful inspirational places that influence her writing.

.
I take inspiration from the world around me and I’m especially drawn to the beauty of nature. I love to capture the details in my writing and that can often be the most fun part for me, researching the landscape and going back through my drafts to add the little touches that will bring my world alive.

My husband is a keen fisherman so before the kids came along we’d spend weekends and holidays exploring the countryside by various rivers. While he fished, I’d wander off with my camera and spend hours capturing images from the sweeping views to the minutest detail of a dew drop on a spider’s web.
In the evenings while he baited up the river, I would bait the area nearby to try to draw out the wildlife. I saw mice and rats regularly, and once I even saw a pair of shrews fighting which was surreal.
He’d sometimes fish late into the evening, or overnight so I know what it’s like to be outside after dark. Sometimes it’s so dark you can’t see a thing and at other times you can read by the light of the moon. I know how your heart races as you rush through a horse field blinded by darkness, every sense on high alert, and the fear that seeing a pair of inquisitive eyes lit up by torchlight can induce.
Seeing the mist rising from the land in the pre-dawn light is magical. It’s such a rewarding experience being outside and though I didn’t manage to write much at the river bank, I’ve used those experiences to enhance my writing.

A local place I adore visiting is Bushy Park, Surrey. It’s a wonderful place to dabble in photography with the variety of waterfowl by the lakes, herds of wild deer (red and fallow) that are accustomed to seeing people, friendly squirrels who’ve take food from my hand and even the occasional fox slinking through the gardens during daylight hours. You can often hear the distinctive call of the green woodpecker, see the patient, still form of the grey heron waiting for a fish to pass him by or the bright flash of a jay disappearing into the trees.
One morning I remember the majestic sight of a herd of red deer swimming across the lake and the steam rising from their bodies as they climbed out the other side.

Another place close to my heart, which I still dream of making my home one day is the New Forest in Hampshire, England. I love the history and the unique experience of driving through the gorse covered landscape spotting ponies, deer, donkeys, cows and sometimes foraging pigs. It’s also a beautiful place to ramble and explore. I have plans to set a book there one day, but for Visions of Zarua I just drew on my love of the place and dotted in a few small details.

Every May, when the hawthorn trees are in full, glorious bloom I think of Hawthorn Cottage. The secluded home where Paddren grew up is a place I wish existed. Within the hawthorn enclosure stands a picturesque single story cottage surrounded by a herb garden. It also has a small pond and a stable for their three horses. It’s the only place Paddren is happy to call home and where Varnia feels most relaxed when she’s not out in the forest.

Redstone Manor in Herristone is named after the distinctive red stone found around another of my favourite places – Ross on Wye and the Wye Valley. Many of the quirky homes you pass are made of this beautiful material and I love how the red soil stays on your shoes. It’s as though it wants you to take a piece of itself home with you.

I love the natural world and I think this has helped me create more believable realms for my readers to enjoy.

You can purchase Visions of Zarua from Amazon.

You can also enter a giveaway – Win 3 x Paperback Copies of Visions of Zarua (Open Internationally)
*Terms and Conditions –Worldwide entries welcome.  Please enter using the Rafflecopter box below.  The winner will be selected at random via Rafflecopter from all valid entries and will be notified by Twitter and/or email. If no response is received within 7 days then I reserve the right to select an alternative winner. Open to all entrants aged 18 or over.  Any personal data given as part of the competition entry is used for this purpose only and will not be shared with third parties, with the exception of the winners’ information. This will passed to the giveaway organiser and used only for fulfilment of the prize, after which time I will delete the data.  I am not responsible for despatch or delivery of the prize.g

Enter by following this LINK

Suzanne lives in Middlesex, England with her hugely encouraging husband and two children.
She wrote her first novel at the age of twelve. She discovered the fantasy genre in her late teens and has never looked back. Giving up work to raise a family gave her the impetus to take her attempts at novel writing beyond the first draft, and she is lucky enough to have a husband who supports her dream – even if he does occasionally hint that she might think about getting a proper job one day.
Suzanne loves gardening and has a Hebe (shrub) fetish. She enjoys cooking with ingredients from the garden, and regularly feeds unsuspecting guests vegetable-based cakes.
She collects books, loves going for walks and picnics with the children and sharing with them her love of nature and photography.
Suzanne is interested in history and enjoys wandering around castles. But most of all she likes to escape with a great film, or soak in a hot bubble bath with an ice cream and a book.