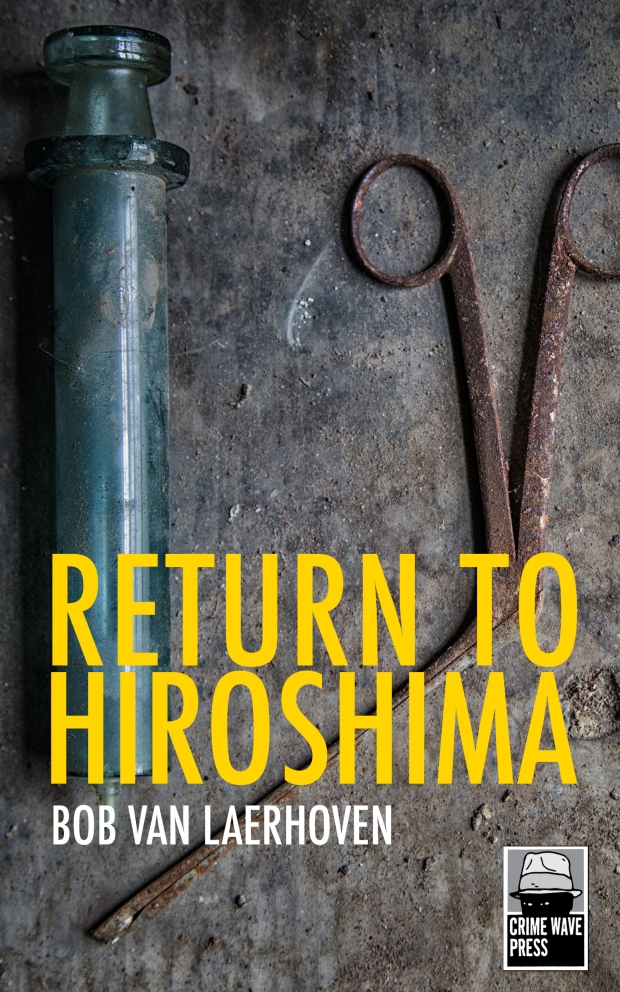 Today I’m joined by Bob Van Laerhoven author of Return To Hiroshima.
Welcome to booksaremycwtches Bob and thanks for taking the time to answer some questions about yourself and your book.

To start off with, a few questions about you as a writer and your novel.
1 What inspired to become a writer?
The answer could read like “Once upon a time, a working class boy dreamed about becoming a story teller….” I grew up in a small village at the border between Flanders(Belgium) and Holland, the second son in a working class family. My dream of becoming a writer started in my early teens, but nothing or no-one in my milieu encouraged me to follow my longing, except my father. I didn’t have a formal higher education, I only read books lent from the local, small library. The librarian noticed the fire of my passion for storytelling and let me read as much as I wanted, gave me tips, and, in a way, “tutored” me to become an author. I started to write at 18, a tender age for a unsecure, hypersensitive boy like me, and in spite of the severe shortcomings of my first attempts, I persevered….Twenty years and nine published novels later, I became a fulltime professional novelist, not an easy way to earn a living in a small language community like Flanders, but hey, I am still around – ( – at 65, working on my 39th book, and having been published in nine languages.
2 What was the inspiration for your book?
I remember that, in my youth I once saw a documentary about the consequences of the nuclear bomb on Hiroshima. I must’ve been rather young then – around 15, I guess – because I saw the images that shocked me so much on a black-and-white television. Those images stayed with me for many decades: I published the Dutch “mother-version” of “Return to Hiroshima” when I was 57….A lot of readers call it a “deep-felt novel”. No wonder: it has been lying dormant – but fermenting – in me for so long….
3 If your book were to be made into a movie, who would you like to play the main characters?
I’m sorry, but that’s a difficult question for me. I always forget the names of actors, and I’m not someone who is a true movie fan. That said, I’ve heard many times that “Return to Hiroshima” with its short, terse chapters and its different POV’s could easily be adapted to the screen. And it could be a success, I’ve heard (, if the actors have the gift to give life to my ambiguous, and sometimes extreme, characters.
Bloggers and writers
4 There has been a huge amount of debate within the blogging community about posting reviews of books they have not liked! Do you read book reviews and how do you feel about the idea of bad review?
There is not one writer in the world who isn’t hurt – especially when he shouts from the rooftops that he’s not – when he reads a bad review of his novel. Our books are rooted in our heart and are a portion of our soul that we present to the public. In my opinion, one can learn from bad reviews if they come from intelligent reviewers. If they come from, let’s say ‘people with a, ehh, ‘minimum amount of brainpower’ who clearly didn’t understand your book, then they are just a pain in the ass, pardon me my French (, and should be forgotten as quickly as possible. Lately, I received a one-star review from a woman on Amazon, and this was all she wrote: “ Didn’t read it. Did not mean to choose.” These are the moments in which writers scratch their head. If you didn’t read a book, how for God’s sake, can you rate it? But the fact remains that such a moronic remark, coupled to a one-star “review” ,is influencing the average of my stars on the Amazon page (which, for the rest, thank God, are four and five stars).
5 In a time where more and more authors are self publishing, do you think that bloggers and authors working together have the power to influence the success of a book? To give a voice to smaller publishing houses and emerging talent, that don’t have big publicity budgets to work with?
It is an undeniable fact that the influence of bloggers to make the public aware of a book is growing by the day. It’s another fact that readers sometimes miss the authoritative voices of professional book reviewers, a race that is dwindling by the day. Twenty years ago, when I was in my prime as a young bloke of 45 (( ), Flanders’ quality magazines and newspapers had special sections for literature where your book was reviewed in-depth. If you were very good in the eyes of seasoned reviewers your book was analyzed in page-length reviews! This is nearly unimaginable nowadays. The digital revolution of the e-books has multiplied the amount of books on the market enormously, so that every author, except the really famous, often very commercial writers, has to scramble to get some attention. The reality of the current situation is that your book may have been reviewed on let’s say twenty blogs, and that readers still tend to overlook you. During the past years, due to the overload of titles on the market, the publicity budgets necessary to really get your name in front of the pack, have grown so explosively that they are quasi only used for true commercial blockbusters. Modern publishers demand from “new kids on the block” a lot of self-promotion. In Flanders, I’m a well-known author with a comfortable following of readers, but in other language communities, I’m that new kid on the block, and I’m appalled by what publishers in these times require from authors in the field of self-promotion…

6 Who is your favourite author to read?
There is no ultra-ultra favourite, but one of my most loved favourites is definitely the Italian war-writer Curzio Malaparte who captured the madness of war in a very personal, exquisitely elegant style.
7 Just because I’m curious about other people’s reading tastes, what is your favourite under-appreciated novel?
André Baillon, a Belgian/Flemish writer who wrote in French. Baillon wrote hypersensitive literature of the finest quality, but was only published late in life, and didn’t had much success in his life. Even now, he’s somewhat a forgotten author, which is a damned shame, if you ask me. Read more about him here: https://www.britannica.com/biography/Andre-Baillon. I don’t know if there is an English translation of Un homme simple (A Simple Man), but if there is, you definitely should read it if you like a disturbing, deeply moving analysis of what insanity feels like.
8 If you could be a character in a book, which would you choose?
I would like to be Geoffrey Firmin, the alcoholic British consul in the small Mexican town of Quauhnahuac, in Malcolm Lowry’s magisterial novel “Under the Volcano”.
About you
9. What do you like to do when you’re not writing?
In my younger days, I was an avid student, and later a teacher, of my own synthesis of diverse martial arts and fight sports. In the plus minus thirty years that I’ve been able to train, I studied Eastern (Japanese, Chinese, Korean) martial arts, but also Western boxing. I’m too old for that now. Moreover, I suffer from a bacterial arthritis, so now I’m the groom of our four horses who help my wife Caroline who is an equine therapist. Our animals are not our subordinates, but our friends; wise creatures who teach us at least as much as we learn them. It really – and literally – opens your heart when you see a paralyzed ten-year-old girl being lifted out of her wheelchair to sit on a broad, patient, and caring horseback, soothing her body and mind when they go for a walk together with the rhythmical step of Equus.
10 Finally….
Cwtch is the welsh word for a hug. It’s about snuggling and cuddling. It has elements of loving and protecting. It can also a safe place in a room or in the hearts of those that care about you and whom you care about. It can be an embrace shared between a parent and a child or lover’s . You can also give a non-romantic cwtch, a heartfelt hug to a friend or someone who simply needs to be comforted.
Who would you want to share a cwtch with? Doesn’t have to be a celebrity if you don’t want it to be!
Nice! I cwtch many times per day with our horses, our dogs, and our cat who forgive me my clumsiness, and, beside with my strong and talented wife Caroline – who really is a gifted horse-assisted therapist for young and old with psychological problems – I would like to share a nice cwtch with Bavo Dhooge, a very talented Flemish author who is twenty years my junior. Together, we are writing a novel in personal letters, something very different from the harsh, noir, multi-layered cross-over novels between literature and the suspense genre that I have published.

You can purchase Return To Hiroshima from Amazon UK as an ebook and paperback.

You enter a giveaway to Win 2 x Return to Hiroshima Paperbacks (Open Internationally) by following this LINK.
*Terms and Conditions –Worldwide entries welcome.  Please enter using the Rafflecopter box below.  The winner will be selected at random via Rafflecopter from all valid entries and will be notified by Twitter and/or email. If no response is received within 7 days then I reserve the right to select an alternative winner. Open to all entrants aged 18 or over.  Any personal data given as part of the competition entry is used for this purpose only and will not be shared with third parties, with the exception of the winners’ information. This will passed to the giveaway organiser and used only for fulfilment of the prize, after which time I will delete the data.  I am not responsible for despatch or delivery of the prize.

A fulltime Belgian/Flemish author, Laerhoven published more than 35 books in Holland and Belgium. Some of his literary work is published in French, English, German, Slovenian, Italian, Polish, and Russian. Three time finalist of the Hercule Poirot Prize for Best Mystery Novel of the Year with the novels “Djinn”, “The Finger of God,” and “Return to Hiroshima”; Winner of the Hercule Poirot Prize for “Baudelaire’s Revenge,” which also won the USA Best Book Award 2014 in the category “mystery/suspense”.
His collection of short stories “Dangerous Obsessions,” first published by The Anaphora Literary Press in the USA in 2015, was hailed as “best short story collection of 2015” by the San Diego Book Review. The collection is translated in Italian, (Brazilian) Portuguese, Spanish, and Swedish.  “Retour à Hiroshima”, the French translation of “Return to Hiroshima,” is recently finished. In 2018, The Anaphora Literary Press published “Heart Fever”, a second collection of short stories. Heart Fever, written in English by the author, is a finalist in the Silver Falchion 2018 Award in the category “short stories collections”. Laerhoven is the only non-American finalist of the Awards.