The Roy and Castells series by Johana Gustawsson

Today as part of Orentober, a month long celebration of the books and authors published by Orenda Books, I’m celebrating one of my very favourite series of books.  The Roy and Castells series by Johana Gustawsson is stunning, a group of novels I would recommend to anyone who cares to listen. They are consistently exciting and moving, written by a writer at the very top of her game. 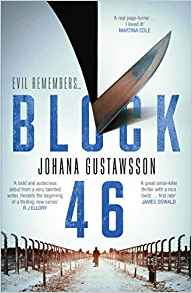 Falkenberg, Sweden. The mutilated body of talented young jewellery designer, Linnea Blix, is found in a snow-swept marina. Hampstead Heath, London. The body of a young boy is discovered with similar wounds to Linnea’s. Buchenwald Concentration Camp, 1944. In the midst of the hell of the Holocaust, Erich Hebner will do anything to see himself as a human again. Are the two murders the work of a serial killer, and how are they connected to shocking events at Buchenwald? Emily Roy, a profiler on loan to Scotland Yard from the Canadian Royal Mounted Police, joins up with Linnea’s friend, French true-crime writer Alexis Castells, to investigate the puzzling case. They travel between Sweden and London, and then deep into the past, as a startling and terrifying connection comes to light. Plumbing the darkness and the horrific evidence of the nature of evil, Block 46 is a multi-layered, sweeping and evocative thriller that heralds a stunning new voice in French Noir.

You can read my review by following this link.

You can purchase this novel from Amazon, Waterstones and Publisher ebookstore

Whitechapel, 1888: London is bowed under Jack the Ripper’s reign of terror.

London 2015: actress Julianne Bell is abducted in a case similar to the terrible Tower Hamlets murders of some ten years earlier, and harking back to the Ripper killings of a century before.

Falkenberg, Sweden, 2015: a woman’s body is found mutilated in a forest, her wounds identical to those of the Tower Hamlets victims. With the man arrested for the Tower Hamlets crimes already locked up, do the new killings mean he has a dangerous accomplice, or is a copy-cat serial killer on the loose?

Profiler Emily Roy and true-crime writer Alexis Castells again find themselves drawn into an intriguing case, with personal links that turn their world upside down. Following the highly acclaimed

Block 46 and guaranteed to disturb and enthral, Keeper is a breathless thriller from the new queen of French Noir.

You can read my review by following this link.

You can purchase this novel from Amazon, Waterstones and publisher’s ebookstore.

Spain, 1938: The country is wracked by civil war, and as Valencia falls to Franco’s brutal dictatorship, Republican Teresa witnesses the murders of her family. Captured and sent to the notorious Las Ventas women’s prison, Teresa gives birth to a daughter who is forcibly taken from her.

Falkenberg, Sweden, 2016: A wealthy family is found savagely murdered in their luxurious home. Discovering that her parents have been slaughtered, Aliénor Lindbergh, a new recruit to the UK’s Scotland Yard, rushes back to Sweden and finds her hometown rocked by the massacre.

Profiler Emily Roy joins forces with Aliénor and her colleague, true-crime writer Alexis Castells, and they soon find themselves on the trail of a monstrous and prolific killer, in an investigation that takes them from the Swedish fertility clinics of the present day back to the terror of Franco’s rule, and the horrifying events that took place in Spanish orphanages under its rule…

Terrifying, vivid and recounted at breakneck speed, Blood Song is not only a riveting thriller and an examination of corruption in the fertility industry, but a shocking reminder of the atrocities of Spain’s dictatorship, in the latest, stunning installment in the award-winning Roy & Castells series.

‘ I don’t think there’s a crime writer who writes with such intelligence, darkness and deep sadness as Johana Gustawsson. This was extraordinary’ Louise Beech.

You can read my review by following this link

You can purchase this novel from Amazon, Waterstones and publisher’s ebookstore.

Born in Marseille, France, and with a degree in Political Science, Johana Gustawsson has worked as a journalist for the French and Spanish press and television. Her critically acclaimed Roy & Castells series, including Block 46, Keeper and, soon to be published, Blood Song, has won the Plume d’Argent, Balai de la découverte, Balai d’Or and Prix Marseillais du Polar awards, and is now published in nineteen countries. A TV adaptation is currently underway in a French, Swedish and UK co-production. Johana lives in London with her Swedish husband and their three sons.