1980: Josephine flees her home in Ireland, hoping never to return. She starts a new, exciting life in London, but as much as she tries, she can’t quite leave the trauma of her childhood behind.Seventeen years and two children later, Josephine gets a call from her sister to tell her that their mother is dying and wants to see her – a summons she can’t refuse.1997: Ten-year-old Clare is counting down to the summer holidays, when she is going to meet her grandparents in Ireland for the first time. She hopes this trip will put an end to her mum’s dark moods – and drinking.But family secrets can’t stay buried forever and following revelations in Ireland, everything starts to unravel. Have Josephine and her daughter passed the point of no return?

I would like to thank the author Alice Fitgerald, the publisher Allen & Unwin and blog tour organiser for the ARC of Her Mother’s Daughter by Alice Fitgerald.

Given that the book deals with some difficult issues it still flows along with an effortless grace, yet it remains a story you experience with an intensity of emotion that the characters and story stay with you long after you’ve finished reading it. Time flows by as you are immersed by the story and the characters and you become lost within the tale.

What impressed me most about this book was the way it was told from the point of view of ten year old Claire and her mother Josephine. Sometimes in books that have two narrators, one suffers in the telling of the story more than the other, their part of the account less filled out and complete. But here both characters are given an equal voice and their thoughts, emotions and behaviour are powerfully evoked. I was also very impressed with the story of the effects of mental illness and childhood abuse and how it consequences are felt down the generations. The damaged Josephine is beautifully written as two personalities at war with each other, one the loving mother and wife, yet at the same time the angry, often violent victim of childhood trauma. While young Claire’s future and mental well being seem threatened by her mother’s own traumatic childhood. Yet she is also written with a lightness of touch and dual personality that reflects the innocence and confusion of a child living with a mother who’s dark moods often block out the light and which threaten to continue such dysfunctional relationships down the generations.

Her Mother’s Daughter is a book of many moods and narrative layers. It engaged me as a reader so much so, I read into the early hours to find out how Josephine and Claire faired, if their frail and damaged relationship could be healed. Fiction has a lot to teach us about consequences and hate and the complicated relationships we form with those we love and this book is a perfect example of the powerful influence literature can have on the reader.

Go buy it, it is worth every penny.

Her Mother’s Daughter can be purchased from Amazon.

Alice Fitzgerald has worked as a journalist for six years.
She has been published in literary journals, online at Refinery29 and Hello Giggles and in magazines including Hello!
Her Mother’s Daughter is her debut novel
Born in London to Irish parents, she now lives in Madrid 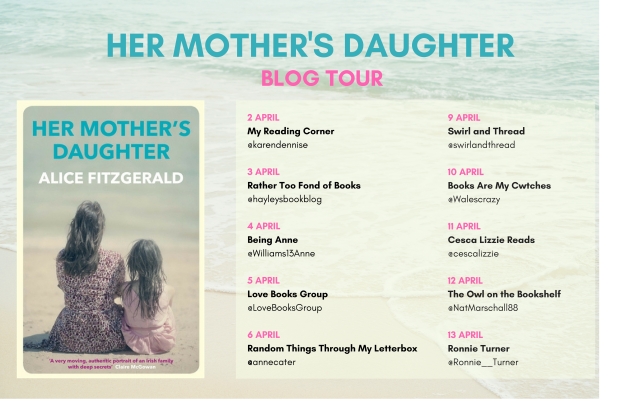